The Start-Stop-Continue template is oriented around action and encourages team members to collaborate and come up with ideas for team improvement. The structure of these scrum meetings is broken up into three parts including start (what they should start doing in next sprint), stop (stop doing), and continue (what they should continue doing).

The format of the what went well retrospective focuses on the team’s strengths and weaknesses and can be used to figure out a plan of action according to what works and what doesn’t. Two posters are put up and each team member writes down things that went well and didn’t go well and they are then put onto the coordinating poster. The team discusses each one.

The Mad Sad Glad retrospective encourages team members to look at their emotional journey throughout the previous sprint by listing things that perhaps made them mad or irritated them, things that disappointed or upset them, and things that made them happy during the project. It is a great way to focus on the perspective of the development team as a whole. 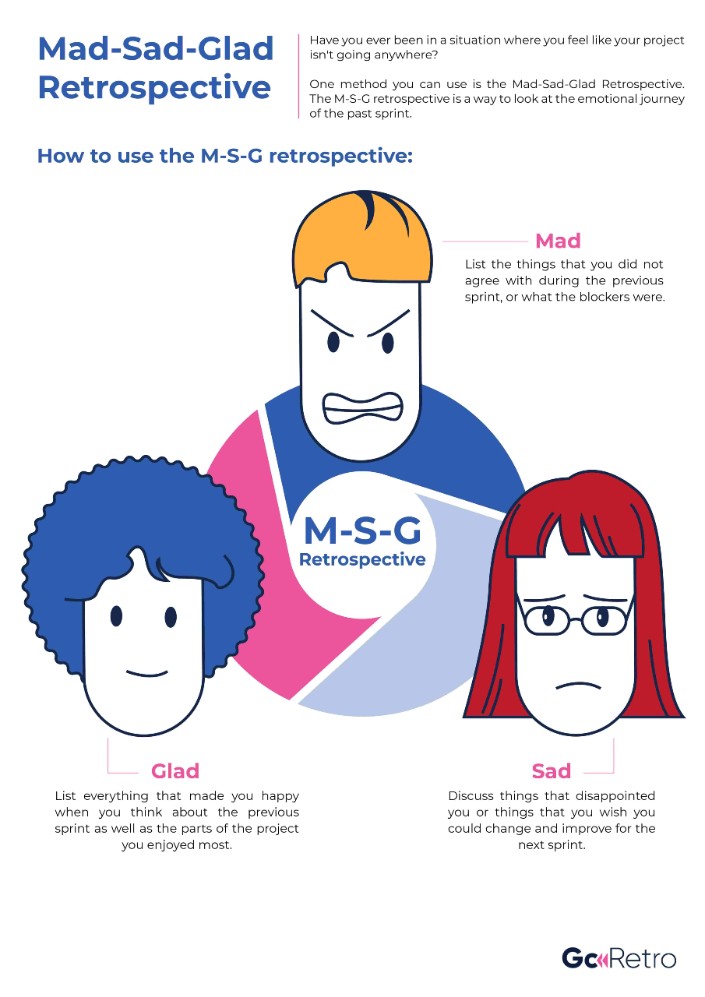 The Three Little Pigs Retrospective takes a queue from the story we've all grown up with :) It is a cool way to gain team insight covering instability, lack of solidity, and what is truly solid...like the different houses in the tale.

The Lean Coffee format is structured but does not include an agenda because the members of the meeting build an agenda at the beginning. This is a good way to do things because it ensures everyone is on the same page and that all topics that team members want to cover will be covered. Team members come up with ideas about the topics they want to cover, vote (perhaps using a dot vote) on the priority of the topics, and then discuss. 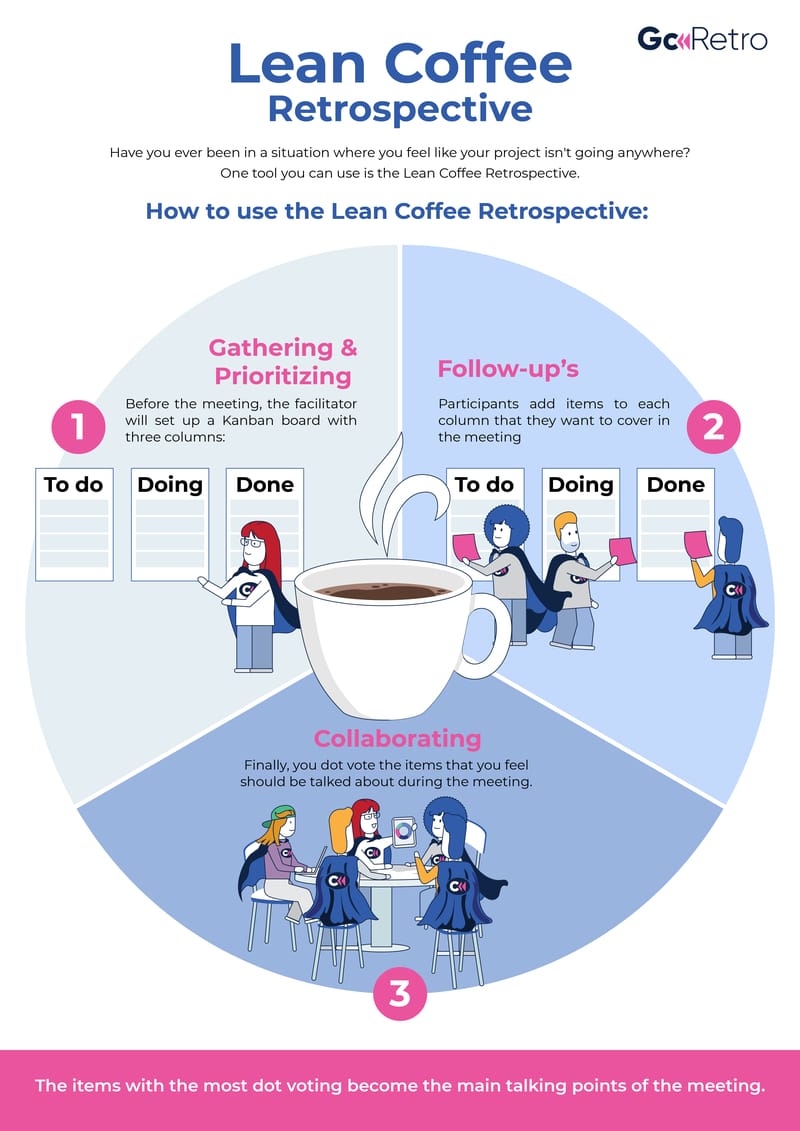 The Movie Critic Retrospective helps teams use metaphors and playful movie critiques to discuss the more complicated and frustrating aspects of their previous sprint. The format encourages teams to explore their more abstract feelings, while making practical suggestions and decisions for the next sprint in tandem.

The Rose, Bud, Thorn Retrospective looks to acknowledge the strengths and weaknesses of the project just gone so to determine how to be successful moving forward for the next project. The retro is split into three parts: Rose (Highlights positives from the project), Bud (Identifies ideas that are still developing) and Thorn (Highlights negative aspects from the project). Once each member has given their thoughts for each section, the group engages in discussion to reach a consensus on which ideas they would most like to pursue. 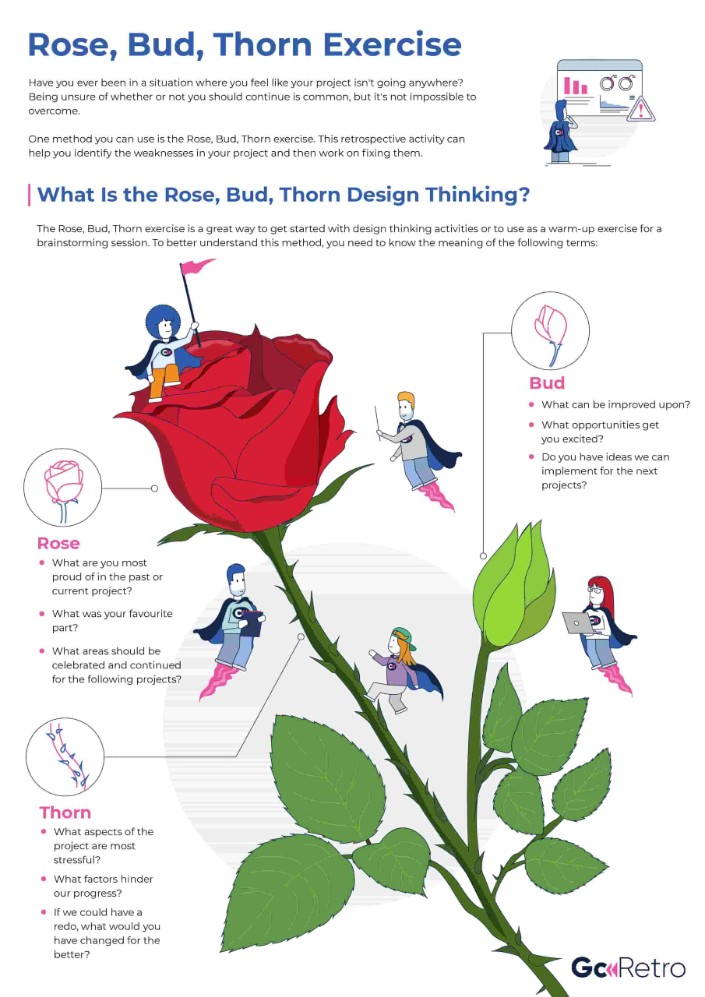 The Sailboat retrospective format is a simple and creative retro. A sailboat is drawn with its sails, its anchor, some rocks, some clouds, and a few islands. The anchor is everything that slows the team down or holds them back. The clouds and wind represent everything that is helping them move forward. The islands represent future goals and visions. The rocks represent risks they might have to take to reach those island goals. It is a nice, visual way to break things down.

The DAKI Retrospective helps see the different team members' perspectives on various behaviors, patterns, and activities they handle. This is done thanks to a discussion of the items that should be Dropped, Added, Kept, or Improved.

It is aimed for reflection, to get the team on the same page, and re-focus all on the goal/s.

The 4Ls retrospective format includes the 4Ls - Liked, Learned, Lacked, and Longed for. The team is given the opportunity to share things under each of these categories from the previous sprint.

The Iteration retrospective format involves reviewing the past sprint both quantitatively and qualitatively. By looking at both things, the team is able to decide what worked and what didn’t, as well as come up with realistic goals and actions for the next sprint.

The Good, Bad, Ideas, Action Sprint Retrospective is an easy way to go over the previous sprint and what went well (or hasn't) as well as come up with real ideas and actions to be used in the following sprint.
This retrospective format is also known by the name "Quick Retrospective" since it's a way to quickly dive in and gain insights on the previous sprint, covering: what was good, what was bad, ideas forward, and actions needed.
It's a simple and straightforward way to ease your team into running sprint scrum retrospectives...and hopefully for it to become a team habit.

The KALM Sprint Retrospective Format is used to moderate conversations between dev team members or what is being done and its actual value overall; are goals being achieved? The team covers the following categories: Keep, Add, Less, and More.

The Wedding Retrospective is an expansion of the What Went Well Retrospective, the key difference being that this format has a section for bringing in outside ideas to the retrospective. The retrospective uses four columns: Something Old (Thoughts on existing practices within the group), Something New (Opinions on newly implemented strategies), Something Borrowed (Ideas from team members on how to improve), Something Blue (The areas of frustration/sadness from within the last project).

Oscar Academy Awards agile retrospective is exactly what it sounds like. Team members are nominated for different awards such as communication, leadership, etc. Also, stories are nominated and voted on for best story, worst story, etc. This is a good way to motivate the team to keep doing a great job.

The Starfish Retrospective helps reflect on the previous sprint with structured categories to be discussed and covered, including Keep, Stop, Start, Less, and More. 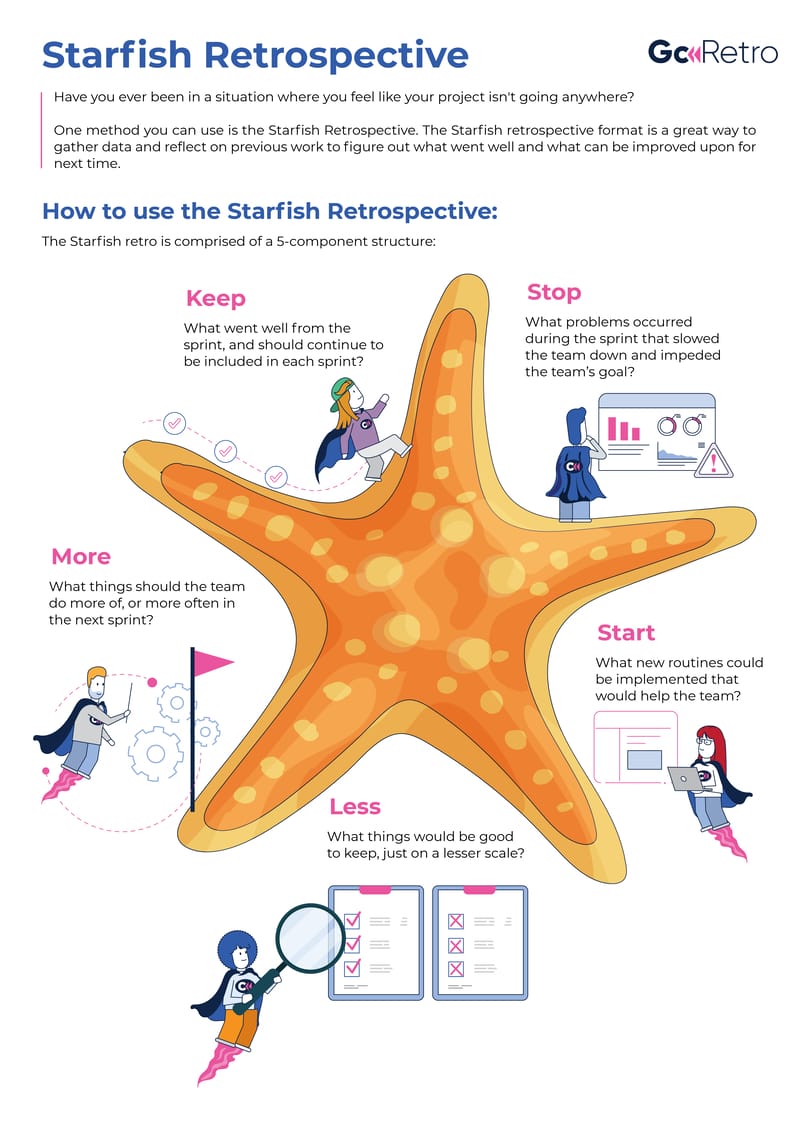 Choosing the right format for your team is important. In the next article, we will talk about how to choose the retrospective format that is perfect for you and your team.

Inspired from the Pacman video game, the Pacman Retrospective asks team members a wide variety of questions on the sprint just gone. The retro is divided into: The Pacman (What did we do well?), The Ghosts (What problems confronted us), Energy Pellets (What should we do more of?), Remaining Lives (What would we do differently next time?), Fruits (What was a pleasant surprise during the project?), High Score (What's our next exciting short-term goal?)

The Retrospective solution, also known as retro, is a chance for your scrum team to take a look at itself and its operations and create a plan of action to be put into place during the next Sprint.

The retro step occurs in between the Sprint Review and Agile Sprint planning, so your team is able to fully understand their progress and see what needs to be changed or fixed in order to continue progressing effectively, efficiently, and overall build software better as a team.

During this process, the scrum team will sit down and have an internal look into their proceedings and techniques. They will discuss things like:

During each of these Sprint Retrospective meetings, the team decides what has gone well and what needs to be improved in order to increase productivity and quality of the product they are producing.

How can a Sprint Retrospective Meeting Benefit my Team?

The biggest benefit of a Sprint Retrospective meeting is that the team has an opportunity to sit down at a scheduled time and reflect on past events, choices, procedures, and behaviors that have occurred throughout the past Sprint. They can look at how these things have affected their growth and productivity. This gives the scrum team the opportunity to change things that need to be changed or reinforce things that are working well.

It also gives the opportunity for successes and positive actions to be reinforced and celebrated. This keeps morale up and sets the bar for the next Sprint.

Sprint Retrospectives give teams the opportunity to celebrate their successes and work on a plan to better themselves for the future. It is very beneficial to all parties involved, individually, as well as the scrum team as a whole.

If your scrum team is looking for a way to continue to grow together and understand exactly how productive your techniques really are, then a Sprint Retrospective might be exactly what you are looking for.

Agile Metrics You Should Be Using

Implementing Scrum Without Talking About Scrum

Dot Voting: A Fun and Effective Way to Get Feedback

The Demotion of Scrum Into Waterfall

How to use Agile Release Planning

The Ultimate Guide to Capacity Planning

Highly experienced in leading multi-organizational teams, groups, in-shore as well as off-shore. The go-to person who is able to simplify the complex. An agile advocate, experienced in all common methodologies. Responsible for the entire software development lifecycle process from development, QA, DevOps, Automation to delivery including overall planning, direction, coordination, execution, implementation, control and completion. Drives execution, and communicates on status, risks, metrics, risk-mitigation and processes across R&D.